Conference and round table: Asymmetry in legal English

On the 8th November 2019, I attended the Legal and Forensic Linguistics Conference at the Université Sorbonne Nouvelle, Paris 3. The one-day event was well attended by students and professionals working in the legal and linguistics field and took place in the beautiful Petit Amphithéâtre of the l’Institut du Monde Anglophone, just minutes from the legal heart of Paris on Île de la Cité.

Following introductions from the co-organisers of the conference – Anton Osminkin and Charlotte Danino – presentations kicked off with Fabrizio Gallai up first.  A few presentations were delivered in French and I’m afraid my A-Level French was not up to scratch for this – luckily, I was sat next to some fellow EULETA members – Natasha Costello and David Best, who translated some snippets of the French for me. Below you can read a brief overview of the presentations delivered and can listen to the round table discussion which happened at the end of the day. 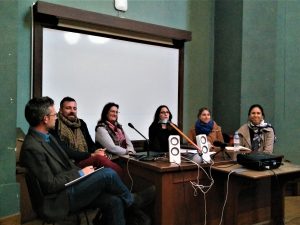 Roundtable: The role of the judicial interpreter and assymetry

Following presentations, there was a round table discussion about the role of legal interpreters and assymetry. The round table was chaired by Charlotte Danino, and David Best acted as interpreter. The participants were:

◆ Fabrizio Gallai: translator interpreter and linguist and adjunct professor at the University of Bologna in Italy

◆ Monique Rouzet-Lelièvre: President of the association EXPERTIJ (Experts et Traducteurs Interprètes Judicaires) (partner of ESIT for the organization of the DU of legal translator and interpreter) 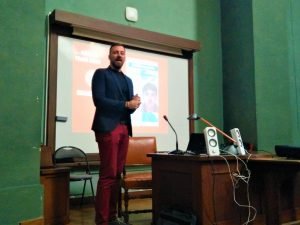 Fabrizio Gallai is a translator, interpreter, linguist and adjunct professor at the University of Bologna in Italy. He gave a very engaging talk emphasising that the role of the judicial interpreter is an important one, that they have the potential to influence legal proceedings, and yet, it is not part of their role to take the law into their own hands.

He explained that there is the danger that interpreters may allow their own personal morals and values to affect their interpreting. Fabrizio stressed that when this is the case, it is important to recognise this bias and to refuse taking on a job where the interpreter cannot remain impartial. He highlighted the great need for further training to ensure that interpreters are better aware of their role and their own positions and more confident in how to deal with this.  He also mentioned the dangers involved in being an interpreter and gave examples from his own experience interpreting in anti-mafia cases. This presentation was in English. 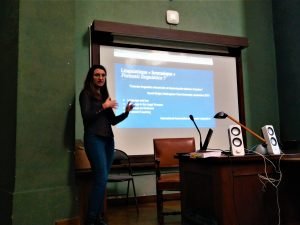 Lucie Gianola is currently carrying out a PhD at the Université de Cergy-Pontoise, supervised by Julien Longhi , in partnership with the Pôle Judiciaire de la Gendarmerie Nationale (PJGN). Her research is focused on how the management of corpora and access to information can be improved in criminal proceedings through the use of automated language processing  tools.  In her session, she spoke about how forensic linguistics can be used to improve the justice system. This presentation was partly in English and partly in French. 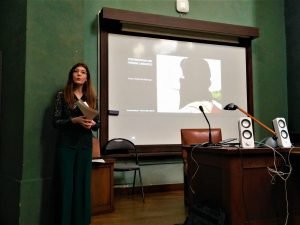 Laurène Renault is a CELSA graduate in Information and Communication Sciences and is currently a doctoral candidate and teacher at the Université de Cergy-Pontoise. Her thesis,  supervised by Julien Longhi, focuses on the analysis of radicalization / de-radicalization phenomena and specifically the construction of online jihadist radicalism. In her presentation she explained that there has been an explosion of hate messages on the web in recent years and that linguists can play a vital role in identifying jihadists through the use of forensic linguistics. She showed how language is used by jihadi radicals on social media including the use of specific phrases, images and the move towards encrypting messages inside images, which cause problems for automated language analysis. This presentation was in French. 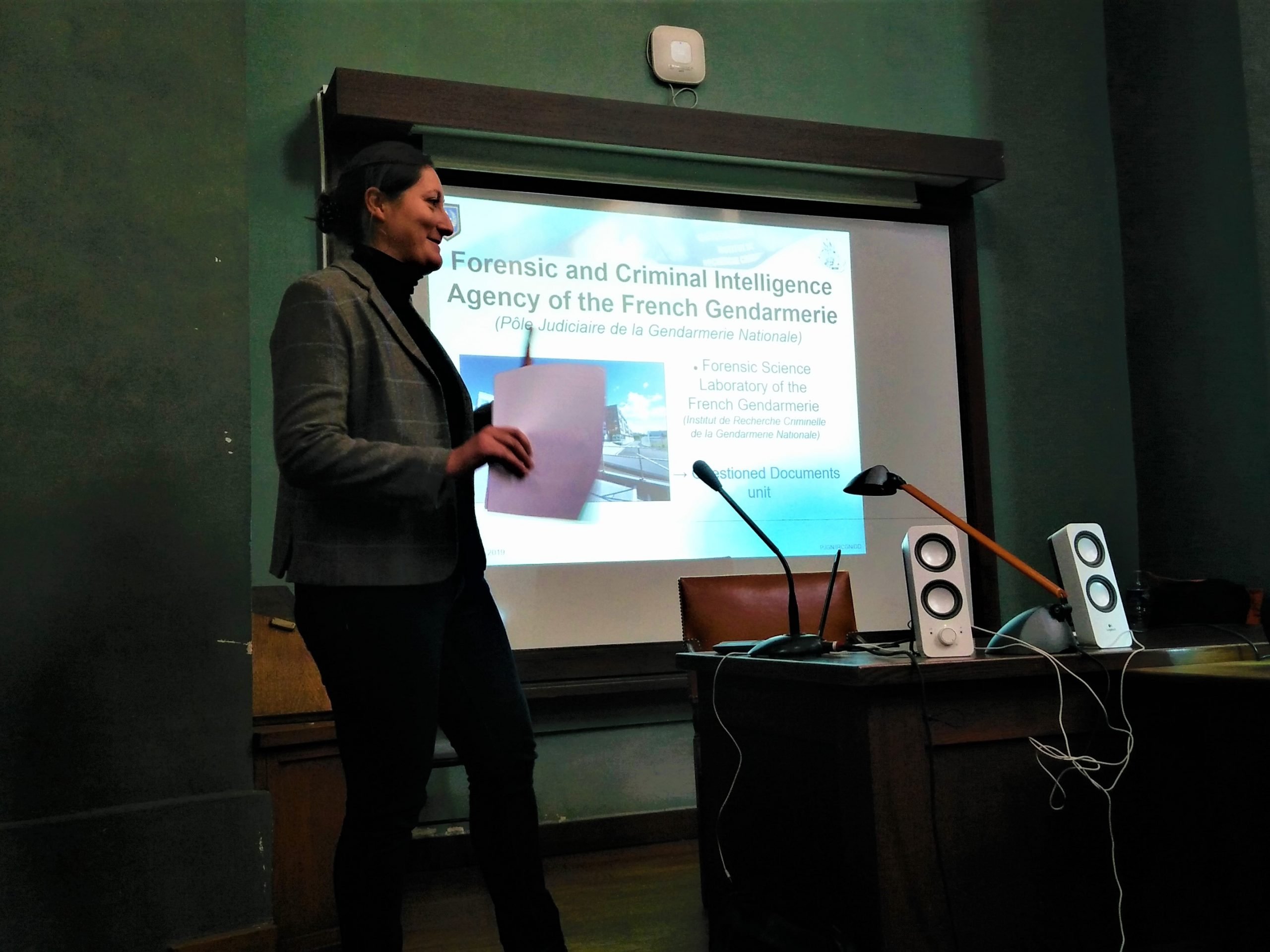 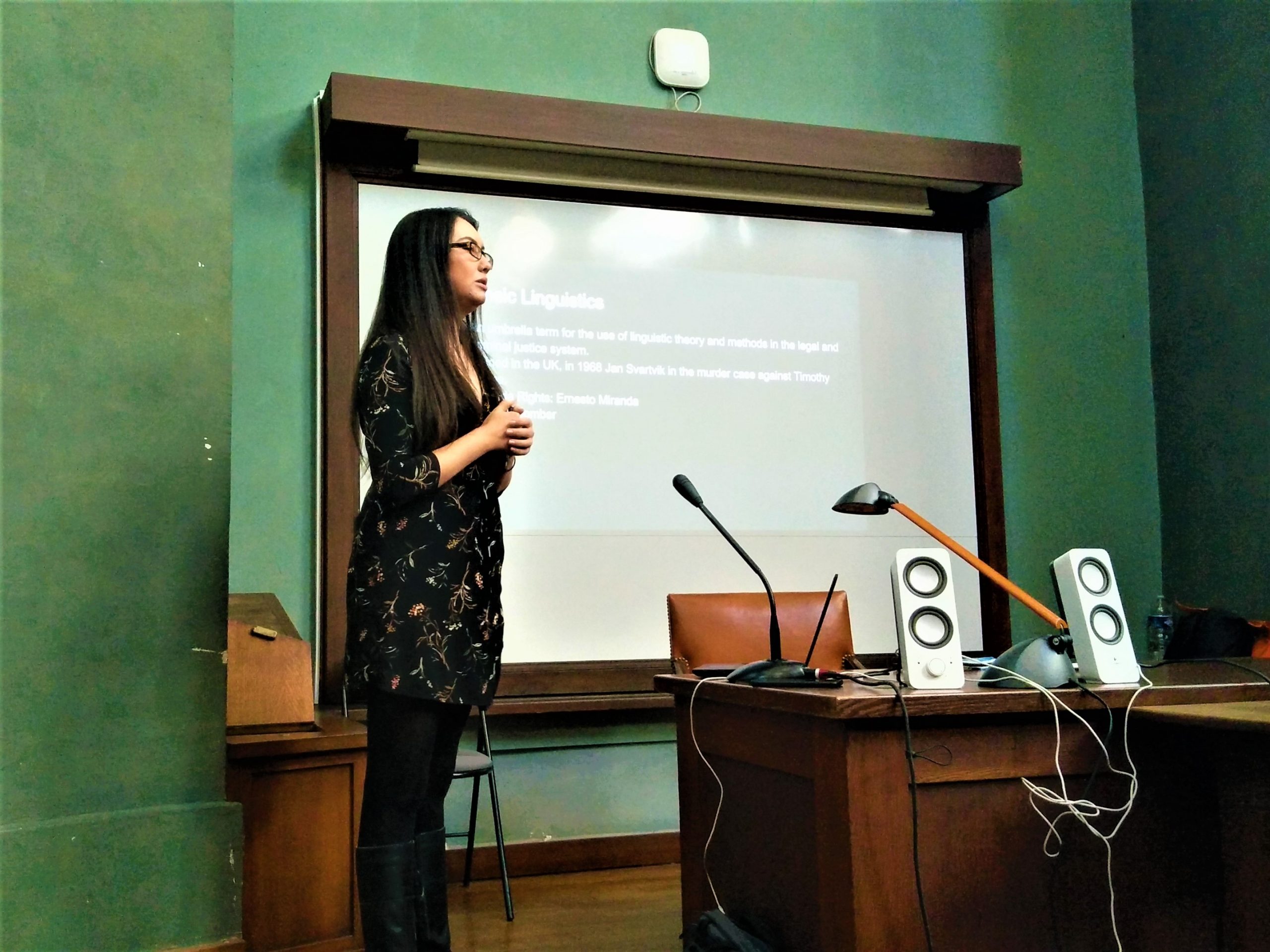 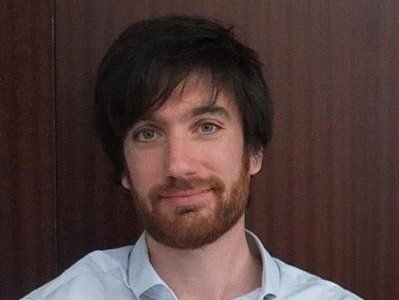 This joint presentation began with Cécile Jacob highlighting the practical work she carries out at the Institut de recherche criminelle de la Gendarmerie Nationale in investigating forged documents and how to identify authorship of a document. Following this Alexandra and Julien presented their research work.

Alexandra Freeman is doing her PhD in Paris at the Université de Cergy-Pontoise’s Institute for Digital Humanities focusing her research on authorship attribution and forensic linguistics.

Julien Longhi is a professor of language sciences at the Université de Cergy-Pontoise and one branch of his corpus linguistics research is focused on looking at risks to society and projects in connection with the judicially related work of the national gendarmerie and the Institute national gendarmerie criminal investigation.

This presentation was partly in English and partly in French. 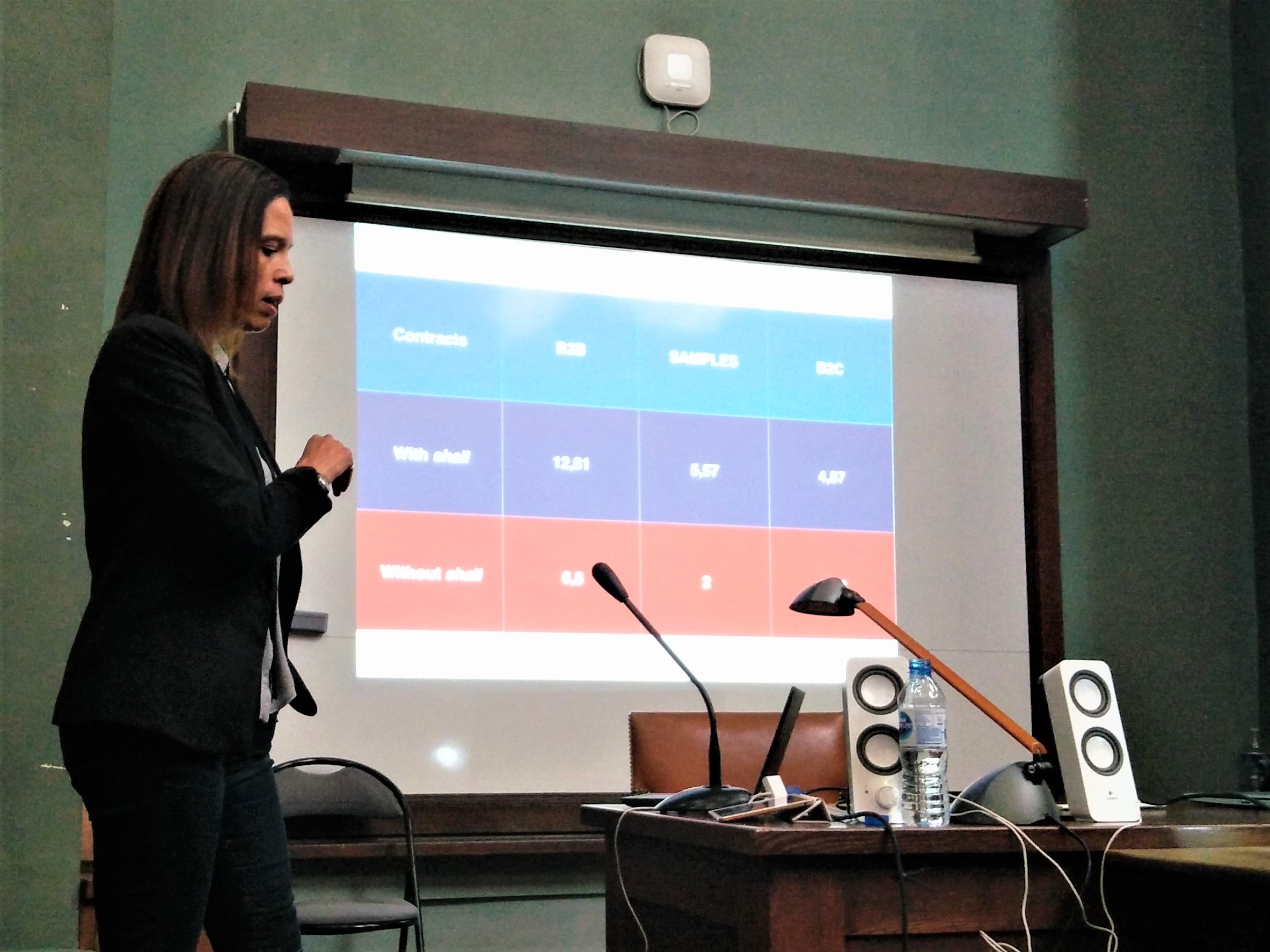 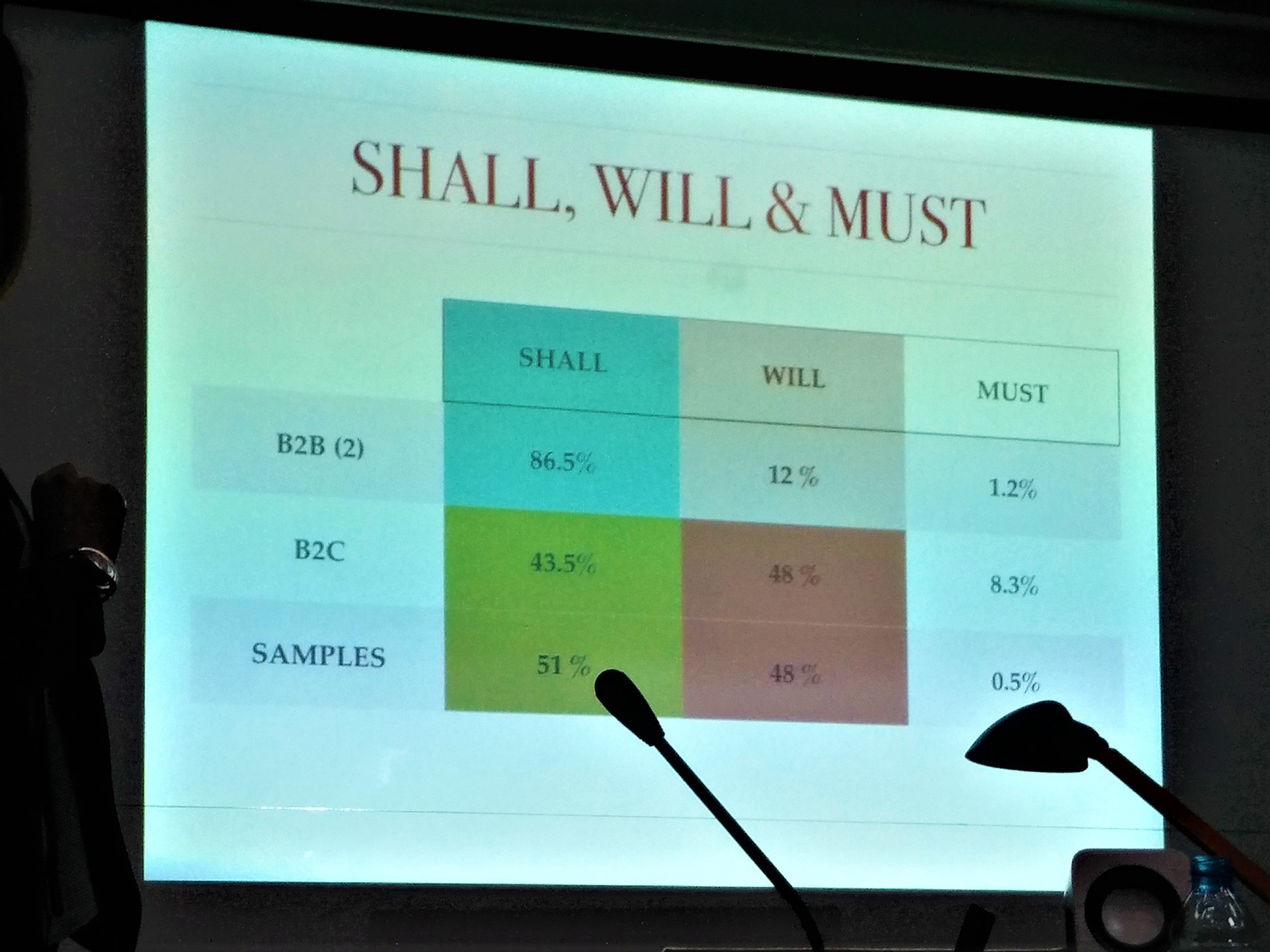 shall v Must in contract drafting

Isabelle Richard is a Professor of Universities Vice Dean at the University of Nantes and focuses her research on English / French Jurilinguistics. Being a fan of the plain English movement and having to teach contract drafting to some students, I was looking forward to Isabelle’s talk.

In this presentation she talked about some research she has been carrying out in relation to the language used to express obligations in English contracts especially comparing the use of ‘shall’ and ‘must’. Her research showed that both B2B (Business to Business) and B2C (Business to Consumer) contracts predominately use ‘shall’ however, the use of ‘must’ is us more commonly found in B2C contracts compared to B2B contracts. This presentation was in English. 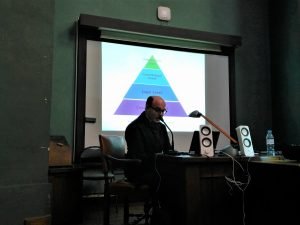 In this presentation Anton highlighted the asymetry in judicial language, whereby different language usage signifies different hierarchies of power, not only in spoken form, but also in written documents – from conventions through to contracts. This presentation was in English. 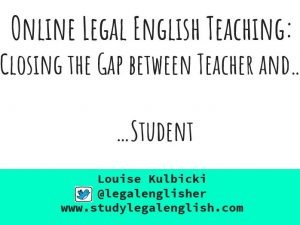 Here I presented about my work as a legal English teacher, some of the difficulties I face and how to overcome them. This presentation was in English. I’ve written more about this in this blog post here.

I am a native British-English speaker, I’m a legal English teacher and the Founder & Producer of Study Legal English.
Legal English translation tools and resources Legal Sightseeing in Paris (Vlog)

🎉 I'm currently offering a 50% discount off my

I was recently interviewed by Luke Thomson the pro